Is President Xi Jinping Following In The Steps Of Stalin?

Chinese Flag by SKopp is licensed under WikiMedia Commons WikiMedia Commons
In this century, there are many ways to wage war.  Biological warfare is one of them.  Some are asking if President, Xi Jingping wants to make Chinese Marxism the only faith in China and ultimately the world.  I refer to Marxism as a faith because it demands absolute allegiance to the Chairman of the Party.  We know very little of the WuHan virus.  China is withholding information and the desired outcome is that fear has gripped the world. 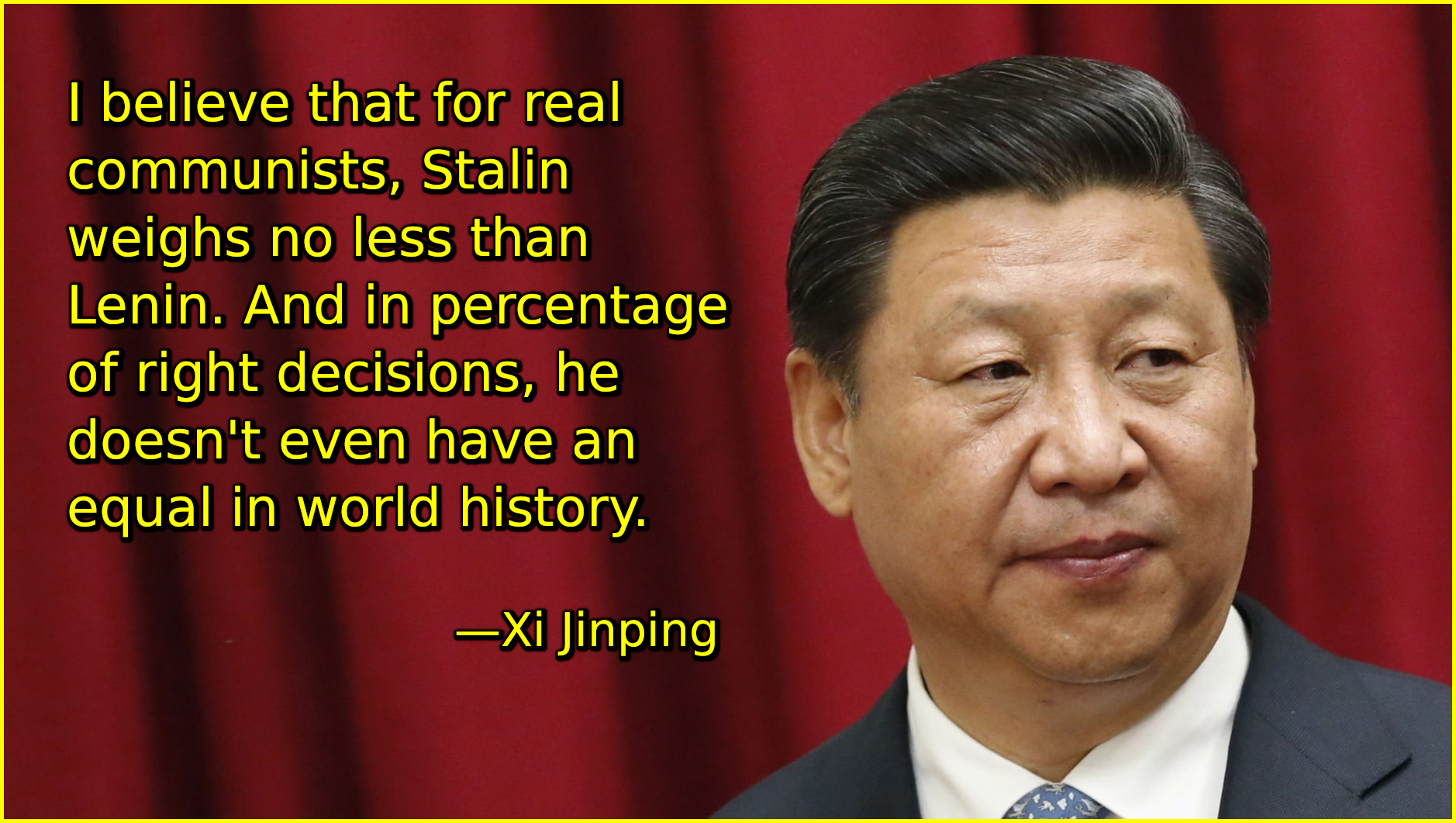 Is the current Chinese administration under the leadership of President Xi Jingping the most repressive we have seen since the days of Stalin?  Stalin led the former USSR from the mid-1920’s to 1953.  Under his rule:

Employing brutal methods to control the population.  This included spies reporting on their neighbors for infractions of any type considered to be disloyalty to the state.  During the peak of the Stalin purges (1937-38), over 7 million Soviet citizens were arrested. Of these, more than a million were executed. Millions more died in the gulags (prison camps) of Siberia.  Those with religious backgrounds like Catholic priests, Jehovah's Witnesses, and Jews were arrested in large numbers.

Absolute devotion to Stalin was demanded.  Any questioning of him resulted in terrible consequences.  A very intense time of persecution and purging in the Communist party occurred during 1936-1938.  Fifty top leaders in the Stalin regime were subjected to “show trials.”  The evidence was almost non-existent.  The most notorious trial was that of Nikolai Bukharin.  Nikolai on the first day of his trial denied that he was spying on Stalin and sabotaging the wrecked economy.  A year later after horrific interrogation tactics, Bukharin confessed that he was “guilty of the gravest charges brought against me.”  Twenty one of the fifty accused leaders then met their fate.

Andrei Vyshinsky, the chief prosecutor, summed up the case against the 21 defendants at the last "show trial." He referred to them as "a foul-smelling heap of human garbage." As for Bukharin, Vyshinsky called him "the damnable cross of a fox and a swine." The chief prosecutor went on to demand that the accused "must be shot like dirty dogs!" He then concluded with this tribute to the leader of the Soviet Union:  Over the road cleared of the last scum and filth of the past, we our people, with our beloved leader and teacher, the great Stalin, at our head will march as before onwards and onwards, towards Communism!  (https://www.crf-usa.org/bill-of-rights-in-action/bria-7-4-a-the-stalin-purges-and-show-trials)

Is President Xi following the same course as Stalin, do anything to get power and eliminate any obstacle in the quest to achieve that?

We must not underestimate the economic threat because the Chinese Communist Party is using the pandemic to achieve its goal of supplanting the United States as the world’s leading economic, diplomatic, and military power.  Sounds unbelievable?

Helen Raleigh, in the January 7, 2020 edition of The Federalist, states that” Xi has declared a war against all religious believers. As the world discovered through leaked documents, Xi was personally responsible in formulating the policy that incarcerated some 3 million Uighur Muslims into so-called reeducation camps without any attested charges.  Inside these camps, Uighurs are reportedly “forced to pledge loyalty to the Chinese Communist Party and to renounce Islam, in addition to singing praises for communism and being forced to learn Mandarin. Many reported prison-like conditions, with cameras and microphones monitoring their every move and utterance.” An international tribunal also found evidence of forced organ harvesting inside these camps.

Helen further reports that “religious believers in China are required to “let the Party lead, listen to the Party, and walk behind the Party.”  They are then required to bow before a giant portrait of Xi. As a result, many Chinese Christians have opted for house churches. (https://thefederalist.com/2020/01/07/xis-china-ends-2019-with-the-worst-religious-persecution-in-the-countrys-history/)

Stalin activated a system of secret police-informers-completely loyal to him.  Their job was to find people they deemed to pose a threat to the Communist Party.

President Xi in this current century uses technology to accomplish the same results of Stalin’s past regime.  Jim Stuber, author of “What if Things Were Made in America Again” (http://www.madeinamericaagain.org/)  states that “technology enables China to pursue its goal of totalitarianism.”  This is nothing more than worship of the state as God.  “Technology enables China to track people via facial and location recognition.”  They are also rewarded scores according to their obedience to state directives.  Those with highest scores receive favors such as passes on the rail lines, loans, etc.  President Xi Jinping has been in office 8 years now.  Will he pursue a path of merciless persecution to those who that do not embrace Communism and execute people in the millions like Stalin or Chairman Mao?

I’ve referred to Communism as a faith a couple of times in this article.  This excerpt from Arthur Koestler’s novel, Darkness at Noon describes the fate of the main character Rusbashov.

In Arthur Koestler's novel, Darkness at Noon, the main character named Rubashov is falsely accused of plotting the assassination of "No. 1"(Stalin). Rubashov finally "confesses" after declaring, "I will do everything which may serve the Party." In the novel, he willingly took a bullet in the head after becoming convinced that he must be guilty because the party said so.
(https://www.crf-usa.org/bill-of-rights-in-action/bria-7-4-a-the-stalin-purges-and-show-trials)

Ultimately the fight for liberty is for the hearts and minds of people and challenging them not to engage in the worship of fellow human beings.  We all know that we are not perfect and not worthy of worshiping one another.  Worship God alone.   “You shall worship the Lord your God, and him only shall you serve.”  Luke 4:8
Organization and Structure

RestoreTheCulture.org is a 501c3 that looks to accomplish the above right in our own area. Kim Kennedy is the President

Our focus is on creating innovative ways to educate and inform young people from Kindergarten on up about the great gift our Founding Fathers fought for: liberty. Why it is so vitally important to humans to live and thrive, why it surpasses all other “isms” and why so many people flock to this country in pursuit of it.
Source: Restore The Culture
Chinese Flag by SKopp is licensed under WikiMedia Commons WikiMedia Commons
©2020, The American Dossier. All rights reserved. Privacy Policy
Political Media, Inc.